If you want to deliver to the UK & Rest of the World, please switch to the UK site by clicking the button below: 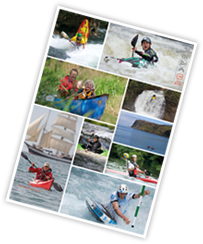 If you want to stay up to date with Peak UK product news, please use the following form to subscribe to our newsletter.

For over 30 years Peak UK have been manufacturing world-leading kayaking clothing and equipment. Come and have a look at what we are all about...

Peak UK was formed back in 1990 when its founder Pete Astles was an up and coming slalom racer, funding his sport by working in a local kayak store. He fell ill and could not train for a few months, so became bored. As the products in the store were badly designed and sized poorly he decided to try making some garments of his own. With help from a sewing machinist friend they soon made a prototype jacket and PFD. His fellow slalom racers all wanted these jackets and PFDs, and that’s how it all began...

Pete borrowed some cash from his father, purchased a sewing machine, some fabric and foam, then learned how to make garments, for the first few years making almost all of them himself, buying new machines and learning how to operate them as he went along. Now, over 30 years later Peak UK is one of the world’s leading brands of kayaking wear.

The Peak UK Kayaking Company is located in the heart of the Derbyshire Dales, near to the River Derwent at Darley Bridge. In 2012 we proudly built our very own purpose built factory on the edge of the Peak District National Park. The new premises enabled us to pioneer our production of custom kayaking gear in time for the London 2012 Olympic Games and the game changing Racer ST, which claimed gold and silver at Rio in 2016. For the Tokyo Olympics the ST2020 was launched, claiming 9 out of 12 medals in canoe slalom.

Our main home, the Derwent Valley, is a World Heritage Site. The Industrial Textile Revolution began here more than 200 years ago. We are proud to have brought back a new textile revolution to the area.

In 2021 we launched our subsidiary company, Peak EU. Based in Wexford, Ireland, Peak EU allows us to continue to supply into the EU as smoothly as possible following Brexit, and marks the next step forward for Peak UK worldwide.

In autumn of the same year we announced that from 2022 our products will now be manufactured under the new Peak Paddlesports (Peak PS) branding. Following the launch of Peak EU we decided to move the branding away from the UK geographical reference and go with a more global, inclusive feel. Peak UK and Peak EU will still exist as the businesses that run the Peak PS brand.